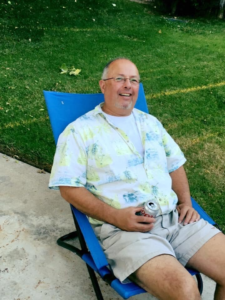 I got a call from Mario’s wife Annette this morning telling me the sad news. Mario had a heart attack last night and died suddenly.  The family is in shock, as am I. He was a good friend and colleague. We worked together for over 20 years.

Mario was a happy and funny guy. He loved his family, his life and his work. We had endless conversations on a variety of subjects from family issues to politics–and occasionally about physics and the lab. He was one of those people at the lab who would go beyond the superficial work conversations with me to talk about his life. I was fortunate enough to hear some of his life experiences–growing up in an immigrant family in Marin, playing football in HS and more interested in partying than studying, working on cars, hanging out with neighbors in front of his house drinking beers (which I did with him once–think of the show King of the Hill), meeting a loving wife who could put up with him (his words), his love for her and his children–and being especially proud that his kids all went to college. Our political conversations went all over the place and I was invited out to his house in Sacramento once to meet his neighbors–who apparently wanted to meet this radical Berkeley friend of his–many were Trump supporters.  It was an interesting set of conversations not commonly found in Berkeley.

Years after HS, Mario tired of manual labor (truck driving and other jobs – he had arms like a bricklayer). So, he went to college and earned a Masters degree in Physics. If I recall correctly it was Mike Lampton who hired Mario–recognizing his ability to figure out how to get a job done without much supervision. Mario worked with Ossy for years–and later with Chuck Carlson (and me). Chuck brought him on to test microchannel plates for our plasma sensors, and to build up our test equipment for several projects. In particular Mario assembled the ion gun that was essential for testing the mass spectrometer I, and a large number of engineers, developed for the MAVEN mission. When I think of the human infrastructure and institutional memory within the lab, Mario was definitely a key piece of that and will be missed. But more so, those of us who knew him as a friend will sorely miss him.