In the upper reaches of the atmosphere, at the boundary between Earth and space, particles and gases and energy do an intricate and colorful dance that varies daily. A new satellite is watching that dance close up. 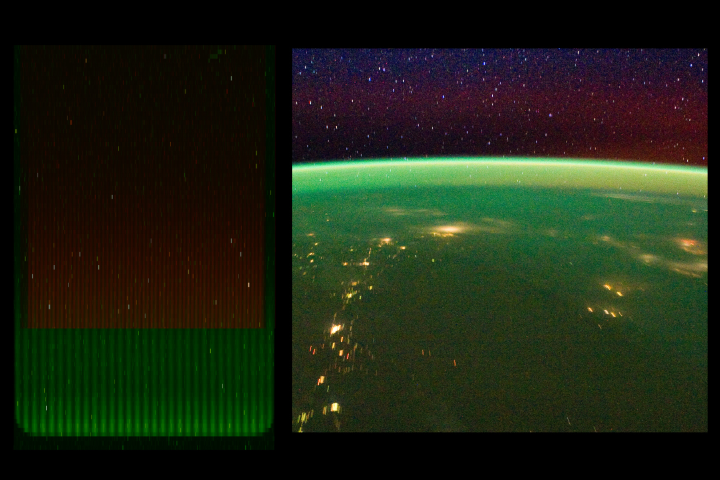 Between 80 and 600 kilometers (50 and 400 miles) above the ground, radiation from the Sun cooks the gases in our upper atmosphere until they lose electrons. The result is a sea of electrically charged particles—ions—intermingled with the neutral upper atmosphere. The visible expressions of this energy flow are auroras and airglow.

Airglow typically appears in thin layers of red, green, purple, or yellow light when looking toward the limb of Earth and edge-on into our upper atmosphere. Airglow occurs when atoms and molecules, excited by sunlight, emit light to shed their excess energy. It also can form when atoms and molecules that have been ionized by sunlight collide with and capture a free electron. In both cases, they eject a particle of light (a photon) in order to relax again. Each atmospheric gas has a dominant airglow color that depends on the gas, the altitude, and the excitation process.

Unlike auroras, which are episodic and fleeting, airglow shines almost constantly. Just a tenth as bright as all the stars in the night sky, airglow is hard to observe except from orbit or from the ground with clear, dark skies and a sensitive camera. Airglow carries information about the temperature, density, and composition of the upper atmosphere, and also helps us trace how particles move through the region.