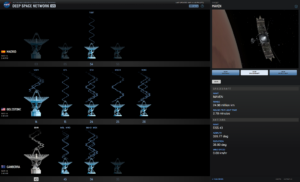 A new visualization product out of the NASA’s Jet Propulsion Lab, JPL, allows users to monitor the real time status of communications with our deep space explorers, including MAVEN.
MAVEN (displayed as “MVN”) is communicating to ground operators via various antenna’s depending on the earth’s rotation, from DSS-43, the Deep Space Network’s 70-meter antenna in Canberra, Australia or DSS-65 in Madrid Spain. According to the “Deep Space Network Now” visualization, MAVEN is approaching a distance of 25 million km from Earth. Others explorer craft with SSL associations are, SOHO, STEREO – STA or STB. Click on the antenna to bring up the spacecraft and its specifics.
Find out where MAVEN and other National Aeronautics and Space Administration – NASA robotic emissaries are at any given moment with the latest NASA Eyes tool